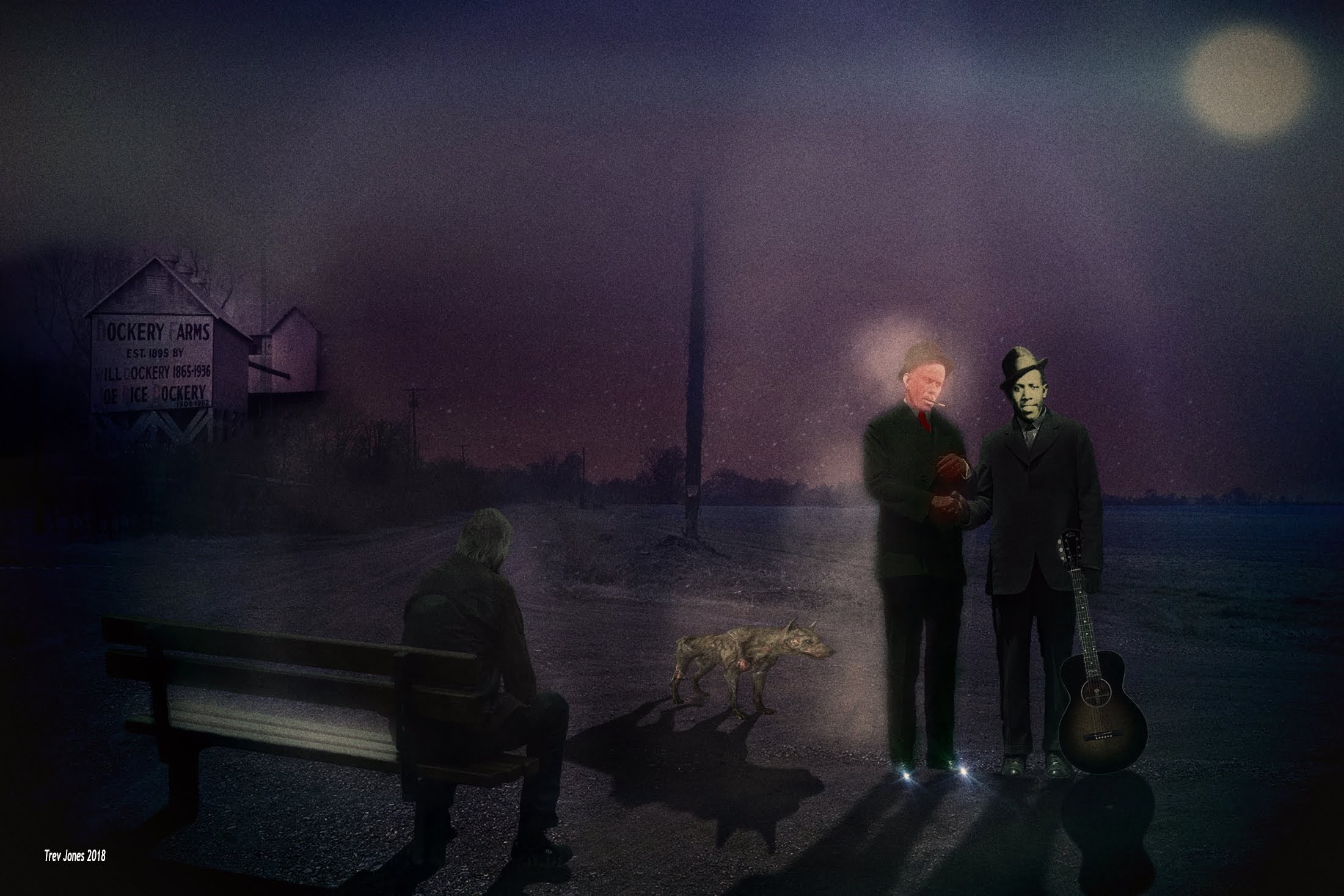 where Mr Johnson meets The Devil. Where blues guitarist and songwriter extraordinaire sold his soul to the devil so he could be the greatest guitar player ever. It wasn’t a problem for Benchman. He just brought out the scene from his imagination.

Robert Johnson was a famous blues guitar player, singer and songwriter before he met his untimely end at 27. He influenced so many modern players including the likes of Eric Clapton. He never made many recordings, but the ones he made will remain in musical history as legendary.

Who was Robert Johnson?

I'd Love To Hear From You Cancel reply

Benchman is my alter ego. I like nothing more than watching the world go by. I live in Wales and in my opinion I live amongst some of the best scenery in the world. Even the same views constantly change with the weather and the seasons.

bway Steve
I enjoy all things creative especially music and art, including photography and the use of Photoshop. With this in mind, Benchman was born. As bwaySteve said, ‘If you have a bench, you have the universe.’ It’s a very apt quote. I can take Benchman anywhere I want in my imagination. I take most of the photographs myself, usually of views that appeal to me and I think will fit in with Benchman’s view.

Ideas
I have to admit though, some of the ideas end up being completely different to how they started out. It’s all part of the fun. I hope you can find enjoyment, perhaps even inspiration in some of the work I have done with Benchman. Thank you for taking the time to read. Enjoy and may your day be as peaceful as Benchmans.

Global warming, but no one’s listening.
The Great Wall above the clouds.
The Sun Keeper.
At the end of a beautiful day.
Mountain skies
On top of the world.

My Other Blog:: Silly Old Sod

Long before anyone had access to the internet, the nearest thing to ordering online was commonly called mail order. Faux Pas …

It seems like an age since I last blogged. It has certainly been a couple of weeks. A Cold I caught …

Never Argue With A Bacon Slicer

After my school days were over, I hadn’t a clue as to what I wanted to do or be. I doubt …

Kevin Bacon, Does He Live Here?

You know how it is when you move house, friends and relatives want to visit as soon as possible. No Visiting …

At last the sun is shining and it looks as though Spring is finally here. Spring Is Here The temperatures aren’t …

We use cookies on our website to give you the most relevant experience by remembering your preferences and repeat visits. By clicking “Accept”, you consent to the use of ALL the cookies.
Cookie settingsACCEPT
Manage consent

This website uses cookies to improve your experience while you navigate through the website. Out of these, the cookies that are categorized as necessary are stored on your browser as they are essential for the working of basic functionalities of the website. We also use third-party cookies that help us analyze and understand how you use this website. These cookies will be stored in your browser only with your consent. You also have the option to opt-out of these cookies. But opting out of some of these cookies may affect your browsing experience.
Necessary Always Enabled

Performance cookies are used to understand and analyze the key performance indexes of the website which helps in delivering a better user experience for the visitors.

Analytical cookies are used to understand how visitors interact with the website. These cookies help provide information on metrics the number of visitors, bounce rate, traffic source, etc.

Advertisement cookies are used to provide visitors with relevant ads and marketing campaigns. These cookies track visitors across websites and collect information to provide customized ads.

Other uncategorized cookies are those that are being analyzed and have not been classified into a category as yet.